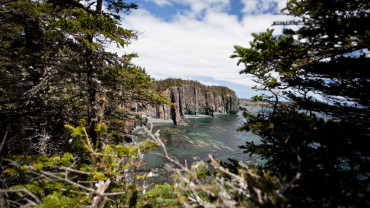 As appeared in Canadian Gardening magazine in early summer 2011. Text by Suzanne Moutis, with photography by Donna Griffith. To view the full article and photos click here.

On the windswept coast of Newfoundland, a clever, contemporary Zone 3 garden feels right at home in its magical surroundings.

Many of us contemplate a hotel stay in terms of breakfast in bed and lounging around the pool. Few of us imagine it in terms of thinking that you’ve never been anywhere quite as special, or felt quite as much at home.

That feeling, however, is exactly what you get when your feet are planted on the ancient soil of the kitchen garden at Fishers’ Loft Inn in Port Rexton, Newfoundland, a three-hour drive north of St. John’s. For John and Peggy Fisher, who own and run the inn with their sons Luke and Gabe, the garden that supplies the kitchen is a necessary element and a natural extension of the space they’ve cultivated since 1997. This fertile patch is also a highlight for visitors, who are encouraged to linger. Inspired by a visit to the kitchen gardens at the Fortress of Louisbourg in Cape Breton, the garden was started about 10 years ago and has  since doubled in size. “The French make so much more of the rituals of harvesting, food preparation and dining,” says John. “They celebrate every part of the process, and we learned from them.”

Gardening in Newfoundland is not without its challenges, but the rewards at Fishers’ Loft are rich. Paths meander among curved beds filled with lettuce, garlic, strawberries, beets and other essentials that grace the dishes of the hotel’s restaurant each day, while tender tomatoes, cucumbers, peppers and basil reside in the greenhouse built in 2009. The garden thrives thanks to the careful handling of Gabe, who oversees it, much to the benefit of the guests of the inn, who dine on fresh, simple fare like partridgeberry French toast, carrot soup and locally sourced fish. It’s an elemental way of life, but one that remains vital to putting down roots on the Rock.